Mannose-binding lectin (MBL) is among the most important parts of the innate immune defence system. A deficiency of this acute phase protein is connected to obstinate infections, or an increased susceptibility for infections.

MBL plays a key role in the immune defence against fungi, bacteria, viruses, and protozoa

MBL is produced in the liver. It has a high affinity for repetitive mannose-containing carbohydrate compounds occurring on the surface of numerous species of protozoa, fungi, bacteria, and viruses. Hence, it binds to the pathogen (opsonisation) and triggers an antibody-independent activation of the complement system (lectin pathway of complement activation). 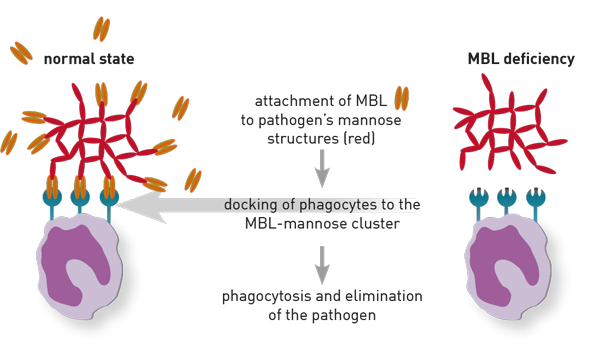 What is the clinical manifestation of an MBL deficiency?

Reduced MBL levels in serum (< 450 ng/ml) are connected to an increased susceptibility for infections with regard to bacteria, fungi, and yeasts (in particular Candida albicans), due to the associated functional complement defect. Defective MBL may furthermore cause decreased or delayed viral clearances (such as Herpes genitalis – HSV-2). Unlike MBL deficiencies, which are usually clinically objectively observable (Serum MBL < 50 ng/ml), heterozygous mutation carriers most often get detected in context with other underlying diseases (during radio-, chemo-, or immunosuppressive therapy, alongside chronic infections). Characteristic clinical pictures are recurrent candidosis or bacterial infections, such as aggressive forms of pneumococcal infections or chronic recurrent respiratory infections.

The MBL gene is located on chromosome 10. Three different genetic variants (polymorphisms) that influence the concentration of MBL in blood serum have been described. These inactivating mutations affect codons 52, 54 and 57 and are also termed B (54), C (57) and D (52). The normal, unmodified MBL gene without these mutations is termed A. Approximately one third of the Central European population is heterozygous for at least one out of those three mutations, which may already lead to an increased susceptibility for infections. Homozygous mutation carriers (BB, CC, DD) or carriers of two different types of heterozygous mutations (BC, BD, CD) are completely MBL deficient. The prevalence of this genetically determined MBL deficiency amount to 1-3% in our population. Additionally, there are two polymorphisms at the MBL gene’s regulatory promoter region at positions -550 and -221 that are termed H/L and X/Y, which have added influence on MBL serum levels. Therefore, the IMD also tests for these two MBL gene variants. While an MBL deficiency (< 50 ng/ml) becomes evident via the determination of MBL levels in serum, MBL levels in the lower standard range can only be clarified by genetic testing (see below).

When should MBL levels in serum be determined?

In case of frequent bacterial or viral infections, as well as recurrent candidosis, especially if the immune status is generally inconspicuous (normal number and distribution of granulocytes and lymphocytes, normal serum immunoglobulins).

When is genetic testing advisable?

As an acute phase protein, MBL is inducible during infections. Hence it is possible that despite a latent MBL deficiency, lower levels of the standard range are met temporarily in a given phase. If that is the case, MBL levels in periods without infections will be far lower, which definitely may be the cause of the infection! Therefore, genetic testing in cases of lower standard range MBL levels (measurement in serum 450 - ca. 900 ng/ml) is recommendable, since this method is not affected by persisting activity of the immune system. This helps to evaluate whether MBL levels were not only temporarily and artificially elevated into borderline range.

What are therapeutic consequences?

With respect to immunodeficiencies¸ only decreased MBL levels are relevant. High concentrations indicate an active infection. Substitution therapy with either recombinant MBL concentrates or concentrates from enriched plasma are currently subject to clinical trials. Patients with decreased MBL levels in serum should receive prophylactic vaccinations, in particular against influenza, haemophilius and pneumococci. During incipient and manifest infections, indications for antibiotic/antimycotic therapy should be determined liberally.

Transport to the laboratory is not time-sensitive and can be sent by mail.

Please obtain the costs for the analysis  from the pdf-document.